The Kraushaar “StagePlayer” is 10 years old this August! 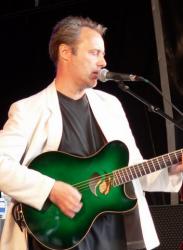 One of Germany’s very select band of independent master guitar builders, Walter Kraushaar has plied his trade for two decades from his atelier above a carpenter’s store in Haaren, a suburb of Aachen, the city of Charlemagne, where the alphabet begins and the country ends. The 31st of August 1999 saw the modest inception of an evolving story as the Kraushaar “StagePlayer Hugh Featherstone”, number 001 of that type, was delivered into the trembling hands of its excited new owner. That was me. For a constructor of bespoke instruments, the StagePlayer occupies a special place in the history of this tiny craftsman firm. It was, and still is as I write this, the first guitar in Kraushaar’s 20-years of activity to have gone well into double-digit production, thereby becoming an authentic, though distinctly customized “series”, as no two guitars are quite the same!

The beginnings of the StagePlayer were hardly auspicious. One of Walter’s assistants had been entrusted some years previously with the project of building an acoustic stage instrument, based on an elegant asymmetrical body shape the master himself had signed off on. I think the idea at the time was to run it up the flagpole and see who saluted. Nobody did. So the StagePlayer prototype: simple, matt finish, and with a ridiculously narrow neck for an acoustic guitar, had been languishing in a corner gathering dust ever since. Neither fish nor flesh it was not a popular creature in those days of big-hair virtuosity. It was acoustic in an electric era; it was humble and unassuming in an age of pizzazz. It was troubadour in the time of Pompadour. It was the Audrey Hepburn of guitars: discreet, slim, shy, a bit of a wallflower. And just like her, its day would come.

I must have made a certain impression on the people at Walter Kraushaar's guitar and bass atelier when I first bought an instrument there at the end of the eighties. It wasn't one of Walter's own; they were far out of my reach at the time. Yet the care I took in choosing that particular guitar – playing three of the same model over and over, listening again and again to the decay to be sure that all strings faded out together, then thoroughly checking the harmonics at the 12th and 19th – must have left a mark, because from then on I was no longer treated like just another dude with eyes bigger than his pockets, but with a certain discretion that gradually turned into a real friendship.

Walter is easy enough to get on with, but you need to keep up to speed. He does not suffer fools gladly, nor is he lenient with the slipshod ways of some musicians or industrial colleagues. However, to those who know him and can value his workmanship, he’s a true stalwart: always ready to help out if you have an urgent problem, always generous with his time and, which is rarer these days, with his prices. My return for good service and good company was to set in motion the Pygmalion process that would turn a neglected prototype into what is currently Kraushaar's most successful model. Because the hours that I was now spending in the easy atmosphere of the workshop, laughing at the witty give-and-take of a place where intelligent people do meaningful stuff and drinking too much coffee, soon led to me trying out every guitar that came off the bench and, in particular, I was starting to devote a lot of squeeze-time to one of the maestro’s ‘daughters’, that shy little creature in the corner with the Audrey Hepburn eyes. She was a diamond in the rough and I was hooked.

Apart from the typical nuances and characteristics of technique, phrasing and chord structure that make up a guitarist’s style, any particular distinction in my sound is surely due to my choice of instruments. Three StagePlayers – a “StagePlayer Hugh Featherstone” acoustic [Fishman system], a “StagePlayer Special Baritone” electro-acoustic [bass A, long scale, EMG magnetic plus Fishman system] and a “StagePlayer Fusion” electric [2 x P90 magnetic]) – accompany me wherever I go. I hardly have to do anything but stand there, they look so good. And they pretty much play themselves, too. I string 12-gauge Elixirs on the HF acoustic (that’s the green one in the photo below), heavy Fender Bajas on the baritone (the blue one) and Thomastik-Infeld 12-gauge Bebop round-wound on the Fusion (the butterscotch one). I use no pedals or effects on any of my guitars. That’s not because I don’t like effects, but because I’m too stupid to work them properly and sing at the same time. So what you hear is what the Kraushaar’s give you. 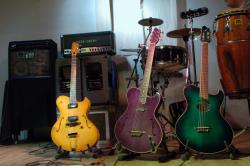 I really love these instruments; a lesser word would not be honest. I was there at the hour of their birth and I will take them to my grave if there’s room. Small wonder then that I nagged and generally got on everyone's nerves about the particular merits and the uniqueness of the original StagePlayer until other projects were set aside and that prototype in the corner was finally taken out, dusted off and given the make-over it deserved.

From prototype to series

Some of the changes that went into the first production model were my suggestions, which was reasonable enough, considering that it was going to be mine. I had already played many hours on the prototype, so I knew exactly what it had:

But also what it still needed:

With its tapered delicacy, playing that neck was fast, but cramped. Many typical acoustic left-hand techniques were hard to work, leading to the “unforgiving” characteristic I just mentioned. It was too intolerant of imprecision to be a good stage instrument (which should make your playing better than it is) although precise right-hand stuff was easy on the spectacularly wide spacing and nicely rolled-off radius of the bridge.

We fixed on another choice of wood for the back and sides (maple) a slightly reworked bracing concept and a high gloss finish to the spruce-topped body. This slightly redefined the sound character, making it silkier, more fluid and friendly. All the brilliance and the attack were still there, but the instrument had gained in sustain and bass. A redesigned neck, much fuller and wider, supported this sustain element considerably while at the same time making the instrument as easy a playing companion as one could choose to take on stage. Although these were custom features, I’m happy to see that they have since become standard in all the instruments that have followed the "Hugh Featherstone StagePlayer Special 001" into production.

The new guitar very quickly began to get noticed. People would regularly come up after concerts and ask me about it, they still do, and of course every friend of the atelier in Ahornweg had already played it before I took delivery! One by one, no hurry, a trickle of customers began to place orders for StagePlayers. It was a small snowball, but it was rolling.

About a year after “HF 001” the first mutant offspring arrived: the StagePlayer Special – an acoustic-electric multi-talent that was soon followed by the StagePlayer Fusion – a cross between a rock axe and a blue-jazz guitar. While keeping the asymmetric body form, both of these instruments featured through-body necks and f-holes, as well as being flat-topped rather than contoured, so it was only a matter of time before the acoustic StagePlayer also appeared in a flat-top version. This finally happened when a couple of my pupils wanted the same guitar as me, but didn’t have enough to bring home a ‘genuine’ “Featherstone” with its contoured top and back and its brushed maple bindings. So, for a little less green stuff, we worked out a compromise: the flat-top StagePlayer, a simpler version with the same look but different bracing and off-the-shelf bindings was born. Its less aggressive attack is balanced with more volume and a very even dynamic range. It’s a top-line instrument but at a premium price.

Back to the future

Now, ten years on, and with StagePlayers in all the colours of the rainbow from ‘amber’ through ‘harlot scarlet’ to ‘aubergine’, ‘racing green’ and ‘blood black’, clinging to their happy owners and vice versa all over this land; with the advent of the Special and Fusion models; with the introduction of the StagePlayer Baritone (Walter's first baritone guitar, of which I’m also the Godfather) and the StagePlayer Acoustic Bass (thanks Matthias, wherever you are!), now is as good a time as any to celebrate the modest success that this small company with a big heart has enjoyed with a clear concept and a fine design.

If you want my money on a tip: Lisette and Gina may come and go (believe me, I wish them well, I have a “Liesl” of my own and I love her too), but I figure the StagePlayer is here to stay. So, if any owners out there would like to contact me with a view to forming an Owners Fan Club, here are my coordinates: hugh.featherstone@gmail.com and: www.hughfeatherstone.com. Thanks, Walter, for the great guitars and for years of technical support, humanity, humour, friendship and good coffee!